This is one part of the month-long campaign to highlight career politician Russ Feingold’s campaign finance hypocrisy. The organizations launched a billboard and direct mail campaign on August 3rd in Green Bay. Feingold has been embroiled in a campaign finance scandal after the Milwaukee Journal Sentinel uncovered that Feingold set up a scam political action committee to pay himself and his former staffers and gave little to campaigns.

“Today families at Lambeau Field will have the opportunity to learn the cold hard facts about Russ Feingold’s campaign finance hypocrisy,” said NRSC spokeswoman Andrea Bozek. “Feingold spent his entire career championing campaign finance reform and as soon as Wisconsin families rejected him, he started a slush fund for the sole purpose of padding his and his former staffers’ pocket books. Feingold abandoned his principles and Wisconsin families are going to abandon him.”

“Russ Feingold manipulated his PAC for personal gain, revealing his true nature only after he was rejected by voters,” said Chris Martin, Communications Director of the Republican Party of Wisconsin. “This is yet another example of what happens when you spend too much time in Washington – you start to say one thing and do another.” 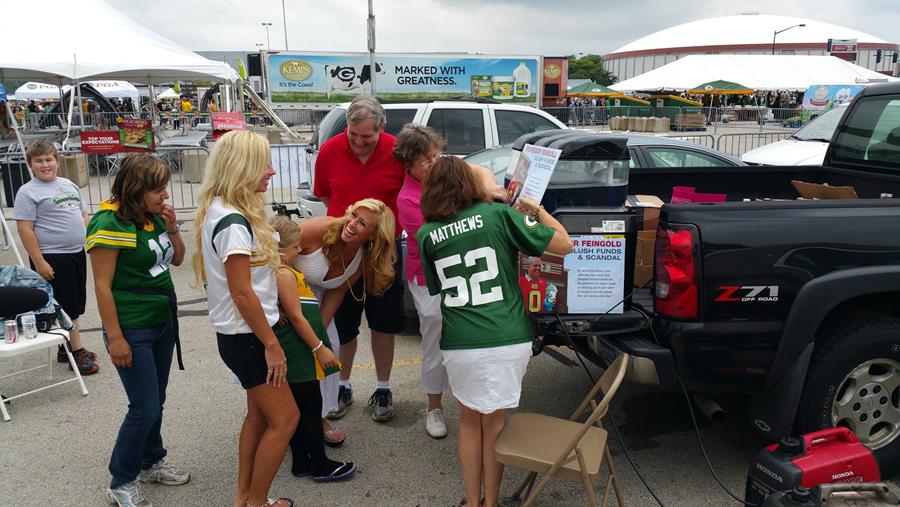 Progressives United PAC Paid Feingold $77,000 From Over Three Years. “Feingold and nine of his former campaign and U.S. Senate staffers drew salaries or consulting fees from the PAC, federal election records show. Five of them also spent time on the payroll of Progressives United Inc., the nonprofit. … Feingold received $77,000 from the two groups, one of which spent $42,609 to buy hundreds of copies of the ex-senator’s latest book, ‘While America Sleeps.’ A Feingold spokesman said the candidate received no royalties from book sales to his PAC under an agreement with his publisher.” (Daniel Bice, “Russ Feingold’s PAC Funded Fees, Salaries For Former Staffers, Himself,” Milwaukee Journal-Sentinel, 6/15/15)

The Milwaukee Journal Sentinel’s Daniel Bice Said The Scandal “Creates The Image He’s A Hypocrite.” THE MILWAUKEE JOURNAL SENTINEL’s DANIEL BICE: “Well this is a case where he operated a Super PAC and most of the money ended up going to him, his staff, and to a number of vendors and clients. And so the potential is it creates the image that he’s a hypocrite, that he’s saying one thing but then you look at his fundraising doing another. But, what’s been equally interesting to me has been the response, or the lack of a response by the Feingold camp. Outside of pointing out that they’ve raised money indirectly, they’ve not really had much of a response. Their response has been to say nothing and to put out another fundraising letter.” (The Milwaukee Journal Sentinel’s “On Politics,” 6/18/15)

WTMJ’s Charlie Sykes Called The Progressives United PAC A “Slush Fund.” WTMJ’S CHARLIE SYKES: “Loser, I agree with Collin, Russ Feingold. The self-righteous, sanctimonious father of campaign finance reform was exposed last week as both a phony and hypocrite. By turning his political action committee into a slush fund, he behaved exactly like the politicians he’s made a career of criticizing, and he did it when he thought no one was looking. Well, we’re looking now, Russ.” (WTMJ’s “Sunday Insight With Charlie Sykes,” 6/21/15)

While you were sleeping Senator Feingold’s ego got even bigger

Today, Politico reports on Senator Feingold’s attempt at a comeback. It is hard to keep track of his hypocrisy so below please find the…

The Topsy-Turvy World Of The Strickland-Sittenfeld Race

WVXU
By Howard Wilkinson
August 9, 2015
bit.ly/1EhIYzk
First, there is the fact that Sittenfeld, despite having the entire Ohio…