Cory Gardner is hard at work for Colorado

During his time in Washington, Senator Cory Gardner is prioritizing the needs of Coloradans and getting things done to make their lives better at home.

He always put Colorado first – regardless of party politics. He’s even the fifth most bipartisan Senator in the Senate.

Sen. Gardner has taken up numerous causes in Washington that are important to people in Colorado, from scientific research funding to citizenship for a Vietnam veteran, and everything in between. In order to accomplish so much for his constituents back home, Sen. Gardner worked with his counterparts across the aisle to ensure that the Senate was passing the best legislation possible.

One of the projects that Sen. Gardner is most proud of is his initiative to increase the funding for the National Science Foundation, which plays a vital role in the innovations and discoveries that improve Americans’ and especially Coloradans’ lives. In Colorado alone, there are 33 federal research labs, which means that the smart and innovative people of Colorado are making important contributions to science every day.

Colorado's 33 federal labs are a critical part of our state's economy.

I'll continue to be a national leader when it comes to federal R&D and making science bipartisan again. pic.twitter.com/nqH7SRY5Hg

Not only is the National Science Foundation an integral part of Colorado’s economy, but really it is an essential aspect of America’s global leadership as “an innovation economy.” Sen. Gardner understands that if we lose our edge and allow other countries to out-innovate us, we will lose jobs, we will lose our status as global leaders, and we will face new challenges and threats to our national security. With this in mind, Sen. Gardner is leading the charge to make science a bipartisan issue again.

In addition to protecting federal research labs in Colorado, Sen. Gardner is also fighting to protect the natural lands that are so important to people in Colorado through his leadership on Senate Bill 47, a package of legislation aimed at protecting natural lands and wildlife in Colorado and across the country. The most important aspect of this bill is the reauthorization of the Land and Water Conservation Fund. Widely considered the “crown jewel of public lands legislation,” the LWCF uses revenue from offshore oil and gas leases and development to manage and protect the United States’ beautiful public parks and natural lands. The LWCF has invested $270 million in various projects throughout the state of Colorado alone.

Even the Democrats are impressed by Sen. Gardner’s ability to accomplish such a difficult task in assembling this vital package of legislation. Senator Michael Bennet, also of Colorado, spoke highly of Gardner’s work to push this legislation through quickly, saying

“It’s rare that a bipartisan lands package moves in Congress, so this bill is a significant accomplishment with a number of provisions important to communities in our state.”

You can read more about Sen. Gardner’s work for public lands here.

Sen. Gardner has also become a leader on an issue that is emerging as one of the most urgent issues facing Americans today – the exorbitantly high cost of prescription drugs that so many people need to live. Sen. Gardner laments the impossible choice that too many Americans are forced to make, saying

“No American should be forced to choose between critical medications and basic essentials, like groceries, which is why I will continue to work alongside my colleagues to help alleviate the financial burden of prescription drug costs.”

To combat this terrible problem, Sen. Gardner authored the Ensuring Timely Access to Generics Bill, which lowers the cost of prescription drugs by removing the barriers that are preventing so many competitors from offering a cheaper version of many drugs. Sen. Gardner understands that there are a variety of factors to address in order to solve this problem and is actively exploring more solutions to increase Coloradans’ and Americans’ access to prescription drugs.

Despite his busy schedule in the Senate, Sen. Gardner did not want to miss the chance to honor one of our nation’s heroes by helping him attain his well-deserved citizenship. Werner Trei is a 71-year-old who immigrated to America from Germany as a child and served in the Vietnam War, but he was never granted his American citizenship. Upon learning of Trei’s story, Sen. Gardner arranged for an officer from the U.S. Citizenship and Immigration Office to go to Longmont, CO to administer Werner Trei’s citizenship test. 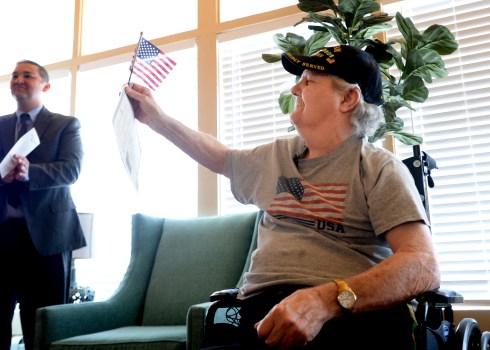 Trei expressed that he wanted to become a citizen so that he could finally vote in the country he has lived in for over six decades and had once fought for. As a veteran of the Vietnam War and the draft, Trei said, “I couldn’t even vote for the people who sent me into those tunnels.” Following the Vietnam War, when public opinion of the military was astoundingly low, it was so difficult for Trei to even get a green card that he just gave up on his dream of American citizenship. Through his own story of his personal struggle for citizenship, Trei wants to emphasize how truly special and important voting is.

“This is an incredible thing to have been able to be a part of as we now celebrate a new United State citizen and a great hero of this country.” -Senator Cory Gardner

You can read the full heart-warming story here.

Sen. Gardner’s hard work to improve the lives of Coloradans and Americans is truly invaluable. While he has already accomplished a lot, there is so much more work to be done. It is clear that Sen. Gardner’s priority in Washington is to make the federal government work for the people of Colorado.

Ernst is Hard at Work for Iowa

Senator Joni Ernst (R-IA) is fighting for Iowa in more ways than one. On her 99 County Tour, Ernst listened to the matters Iowans care…